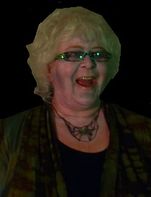 Zelda is Fast Freddie's widow and a dang good cook!  Back in the heyday on Fast Freddie's Funeral Home and Fried Pies, it was Wanda who made the delicious pastries served as snacks at Fast Freddie's funerals.  The formula worked well until a funeral attendee found a finger in her fried pie. Zelda had to quit selling her food at funerals, but she continued to cook up tasty treats in the basement kitchen at the funeral home.  After Freddie's passing, she quit coming out of the basement and began inventing yummy Halloween-themed snacks for Harvey.  Learn how to make tasty, fun, treats every week on Harvey's Festival of Fear!! 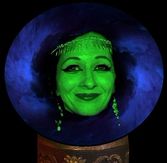 Hiya' sweeties!  Click my pretty round face and submit your questions to me!

Promote Your Page Too